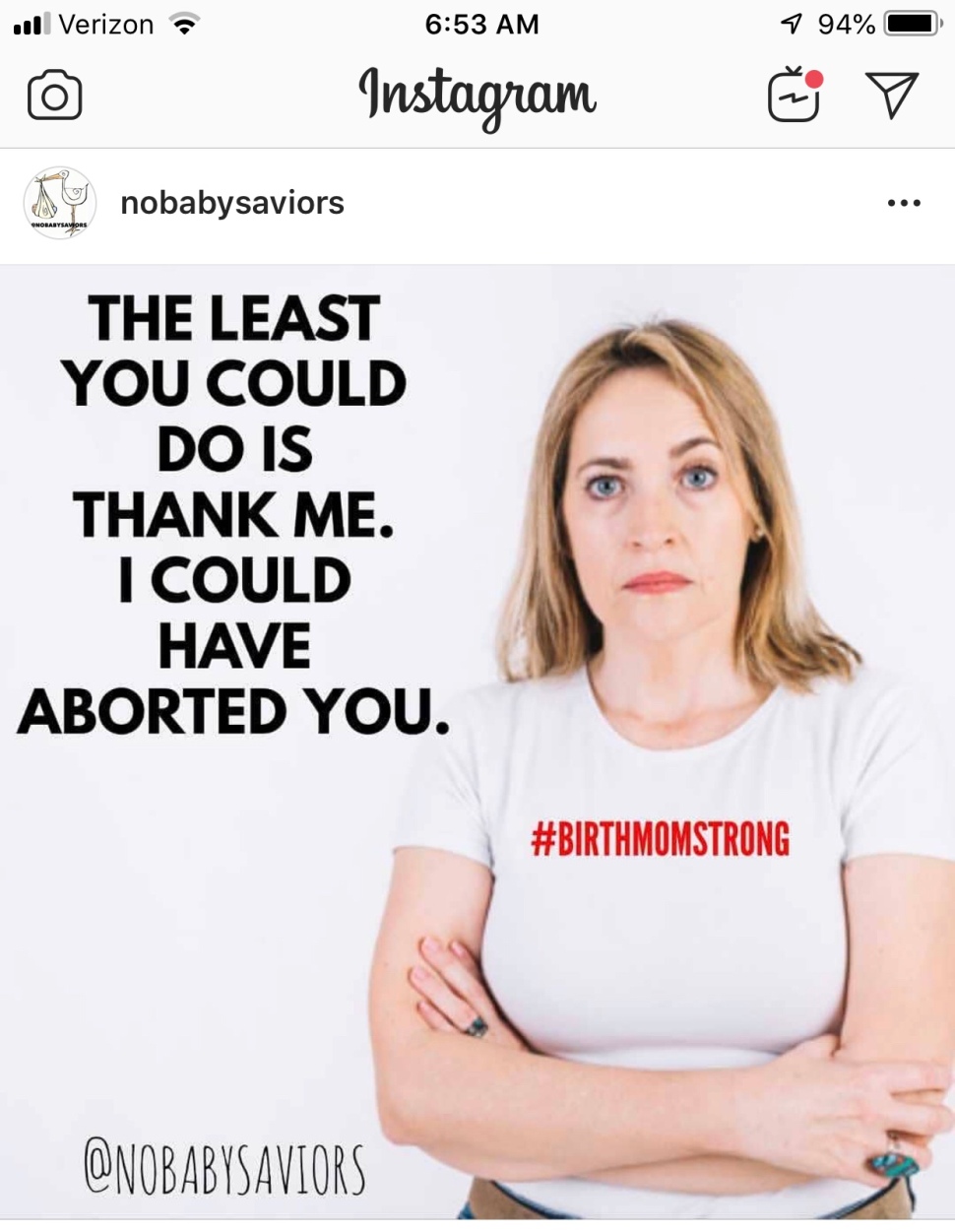 This is what Adoptees face. I’ve heard this statement a lot growing up. It comes up a lot.

People have abortion and adoption side by side. It’s an either or kind of mentality issue where keeping your baby is simply not an option.

I feel that is what we Adoptees are noticing and have been noticing for a while. Confronting this kind of mindset is a chore. And Adoptees are working daily to address it and also change this two sided mindset to show the option to keep your child is in fact an option.

I get that I can not go back. Duh? That’s clear? I’ve shown everyone that has read this crazy blog how it is with my own Mama. Blocked. Silent. Removed. I get that. Now. You get that I get that hopefully.

There is no warm new womb waiting at the age of eighteen that welcomes up back and life becomes anew. But at eighteen I became keenly aware of my Mamas thoughts about me. At eighteen it was like I consciously heard her thoughts like energy before. She was no longer just a knowing, she was actually thinking thoughts of me. That’s really when I began to understand more deeply my bond to her.

Mothers don’t forget their children. It’s just not true. And after relinquishment our Mamas kind of go into an internal relationship with us. Like prayers. And talking to us when they are down or happy. To me it feels like flipping a light switch on and off. I would hear my Mamas thoughts and then not. On and off.

And I do believe when your Mamas thinking about you? You think about her too. That’s how connections work.

My Mama wanted this to go well. But. She factored out her rebel side. The rebel that made me be. She changed and became more compliant. Thinking I would comply too.

From what I’ve gathered as of late from my visits with Mama is that she totally disconnected with that part of herself a long time ago and was shocked to see this side of herself in me.

This does upset me. Why? Because it means that she suffered from what psychologists call disconnected with oneself.

What’s this mean? It means my Mama disconnected with the part of her that made me and deemed this part of herself as flawed. If she had not? I’d not be adopted. Case and point.

What I’ve experienced is this. She struggles to identify with this part of herself that has grown in me uninhibited. She struggles to see herself here in me. Which makes reconnecting a chore as she keeps kicking herself out again and again and not realizing it.

She’s unfamiliar with this side of herself now. It’s not comfortable to look at. Why? Because she displays discomfort when I come around. And the discomfort is also attached to her identity with my other sisters in connection with this part of herself she did in fact hide from them.

That’s a zinger. A big zinger. I come around? Zing zing zinger. Just being me? She gets all upset. And I don’t back down. Which drive the part of her that’s denied this part of her to let me back in.

This. Is what adoption does to families. We come back? Not all of Mamas light are on due to disconnections with themselves attached to the act that made us. And that’s simply not healthy. Not helpful.

Adoption is a triad. Adoptees realize this very early. At least I did. But the parents who raise us simply only deal with one set of parents. Our original parents are excluded from the picture and they actually made the new picture happen if you really think about it?

New mom takes on the first moms duties and act as if she’s the original Mom. Which is false. A lie. And lies fall apart.

Then? People must adjust. From what I have experienced, (Angela) is that the time laps and lack of understanding of genetic dynamics is that the parents involved are so intrenched in their own lopsided narrative to see an adjustment is needed for us. This is an issue. Because if adoption is for the highest good of the child? Then new adjustments must be made to accommodate the new narrative when they return to the original home.

Growing up Adopted means to me growing up in psychosis. It’s not formulated in complete truth. There’s pieces missing all around. Everyone else seems to be quite content to maintain a lopsided view of who we really are while we maintain a true view of the whole always. And we are encouraged to do the same.

Then. Reunions comes. Now what? Pleasantries and then back to the old grind? That’s precisely where I’ve gone. The same old grind is grinding my last nerve.

The way I see it is more holistically. A triad is a unit of measure. And in my life I’ve balanced the two woman’s influence and affects on my identity as the whole. Integrating them both into the separate lives they have lived is the task.

Two woman. Two Mamas. Linked in a triad. With me in the middle. A lovely thing if balanced. A very hard thing when not. And after reunion happens is when the discomfort begins to get really rough. For me at least. It’s became a tetter tatter of balancing myself with each. Talking only about what they wanted to talk about while denying my own questions answers for their comfort. Seems odd to me.

Trying to balance your own identity with two separate narrative is what Adoptees do. Reunion should be and could be and will be the place where the narratives merge. They never should have been disconnected at all. In my mind they never were. In my Mamas minds? They did. That’s an issue in its self. One I confronted here.

These are the issues I bring up so forcefully here with my own true grit and years of learning to navigate. I’ve dealt with the discomfort of not having them both fully accepting of the others contributions towards my good. That’s is messed up. Adoption messed that up with lack of research about the affects on us.

From what I’ve seen, adoption dropped the ball and left these two woman to fend for themselves. And? The results is a lopsided mindset around me. What do we do now kind of thing? And my own Mamas try to chuck me in the chuck it barrel daily? Pushing me away.

And. I will be on record for saying this. Why? Precedent. Setting my precedent to join others. Because I’m just one typing right now. But there are so many waking up to the lopsided, there will be more to add to my words.

Yes. This is big.

Each day on Twitter I read my Adoptees words as they work to navigate this choppy water of emotions all around success. Feeling cramped and jammed in by those who? Signed on a dotted line before God to care for our needs and yet deny them now. Makes no sense to me. But it is.

My feeling is to confront the behaviors of avoidance head on. My own Mamas have gone rouge. Others are rouge too.

And trust is an issue too. Neither of these woman I’ve followed trust me to lead them now. That’s kind of a sad thing. Woman can’t even unit? And we want one to be president? We want woman to lead? With this kind of nonsense going on? Denial? Blocking? Squirming and turning away from the truth as is? Please.

Excuse me? I did not sign those papers dear woman. You both did. And as I see it? You breached the contract. Not me. As far as I am concerned I have two Mamas now. You both matter. And I’m calling bullshit on both of your lopsided mindsets.

Like. Hello! Remember me? The one this was supposed help? You both are responsible. Paper does not alleviate responsibilities before god. This contract bound us together in this holy matrimony. And lopsided mindsets do none of us any good now.

I’ve been working on this change now for over 20 years. I believe I have been patient. I’ve put forth effort to connect time and time again.

My question is this: what will you do now? Bury your heads in the sand? Shall we just keep pretending? When life’s waiting to be lived together?

My Mamas have not met. And I wish them too. Like two Mules ties together they each back up from the other with me in the middle being torn apart. Blind to their own actions of denial.